Intent vs. Outcome: adding another layer to expected possession value

This is a thinking out loud kind of post. A bunch of basic charts and numbers are here which should be enough to give an idea of what I’m proposing. I want to think about this some more, which is usually a long and slow process because life gets in the way, before doing a version with nice looking vizes, etc. + also get feedback and comments from you guys.

Pitch control, pass probability, and action likelihood are outcome based models. Pitch control tells you the probability of controlling the ball if it were played to that part of the pitch. Pass probability tells you the probability of successfully making a pass to a particular point on the pitch and is likely based on historic pass data which means it is outcome based. Action likelihood is also probably based on historic match data and is also probably outcome based. An additional aspect we need to evaluate things like player decision making is intent. That’s what the rest of the post is about.

We’ll exclude action likelihood and only look at the output just from the possession value and the pitch control models. This lets us evaluate any opportunity across the pitch without prejudice for what players tend to do in that situation.

If you’re familiar with pitch control and possession value, you can probably just glance at the Glossary section and then skip straight to the Intent vs. Outcome section.

Pitch control tells you the probability of a team and its players controlling the ball at various parts of the pitch if the ball were to be passed there. This is done for each instant of the game and changes based on the positions of the players and their movement.

I use Spearman’s model but you could probably swap it out for any other model too.

I’ve used the PV grid at https://raw.githubusercontent.com/Friends-of-Tracking-Data-FoTD/LaurieOnTracking/master/EPV_grid.csv which looks like this for a team attacking left to right - 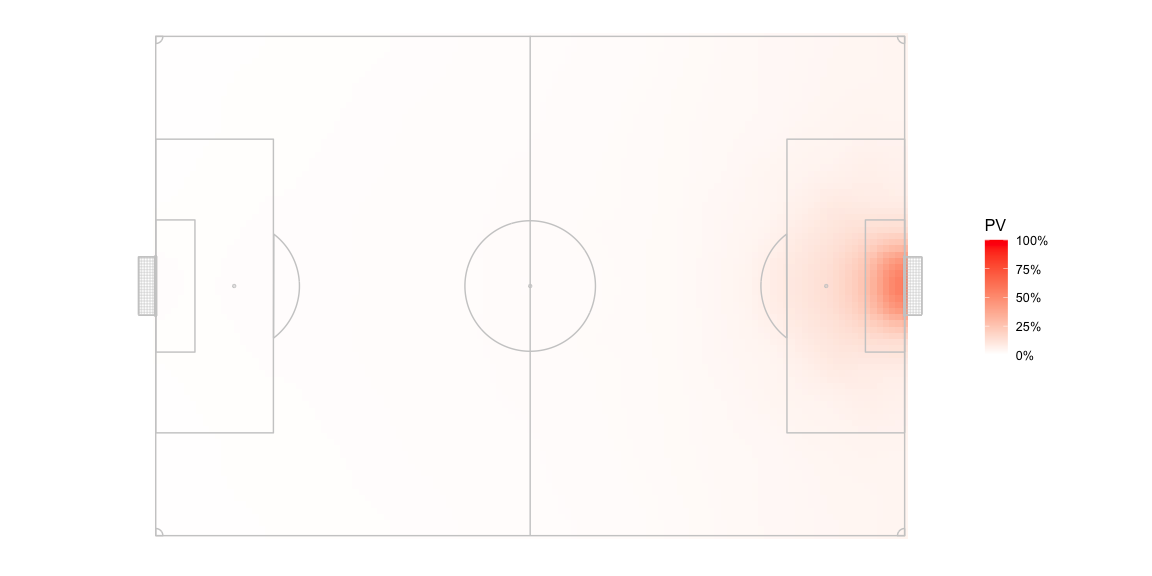 The possession value sharply climbs close to 50% near the opposition goal but is quite low for most of the pitch.

We can rotate the pitch halfway around and get the PV values for the respective part of the pitch for the opposition since that team is attacking right to left.

You should be able to swap it out for another PV model, if you so prefer.

You should be able to combine these to evaluate what passing options offer progress to the team in possession.

I ignore the possibility of passes that travel more than 2/3 the length of the pitch. Only Ederson can make such passes. We consider the area that is within a radius of 2/3 length of the pitch at any point of time and ignore everything outside of it.

We can expect DefenseEPVAdded_xy to be positive very often, since DefenseOriginPV is a negative value so the more interesting thing to analyse would be AttackEPVAdded_xy.

I use one frame to give an example of these calculations.

Here is what the pitch control looks like in a random frame. I exclude players that are offside so the two players from the blue team in the offside position have zero contribution to pitch control. 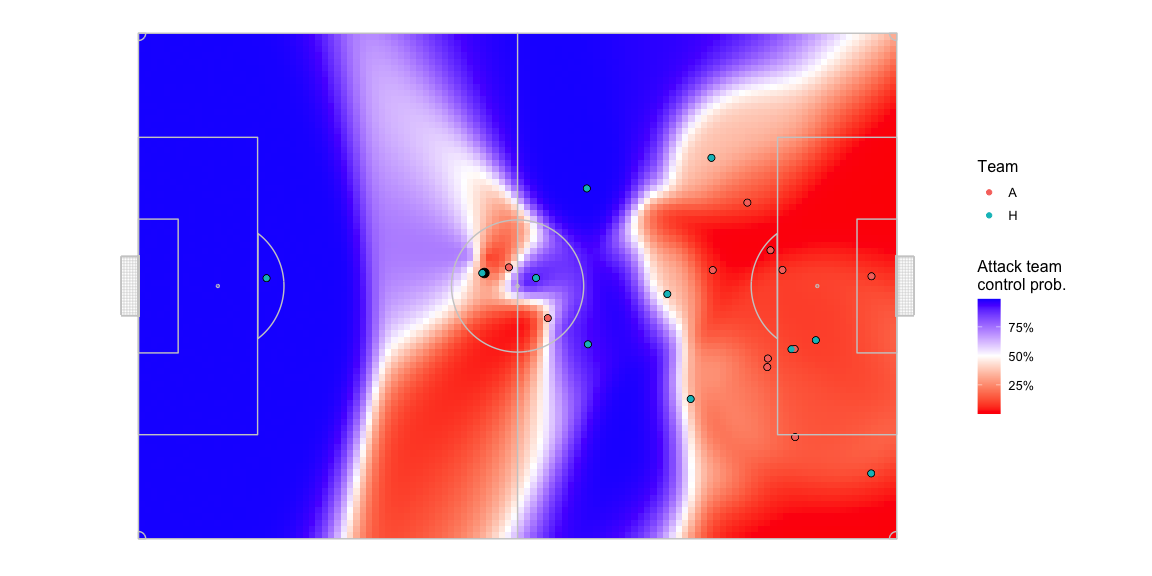 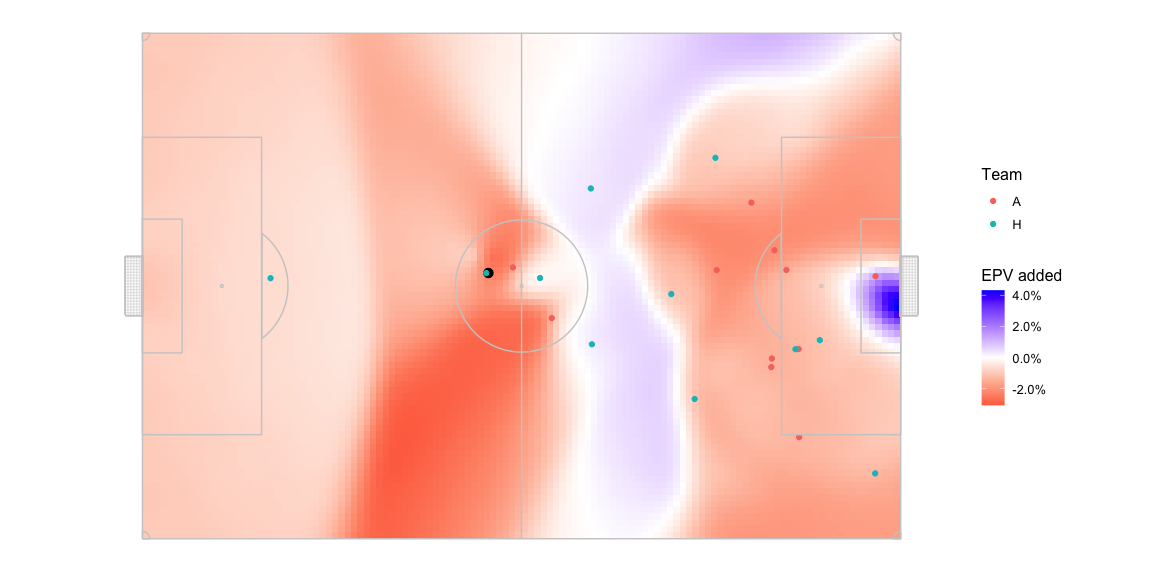 There is some territory in the middle of the pitch where passing the ball is expected to return a positive AttackEPVAdded_xy. And then there is an area near the opposition goal, which has a larger AttackEPVAdded_xy than the middle of the pitch. This area lights up because 1, the goalkeeper isn’t given extra powers to control the ball in the pitch control model which is not the case in real life since keepers can catch the ball with their hands, dive on it, etc. and 2, pitch control is only reflective of passes, not shots. As a result of this inconsistency, the logic above would suggest that in this situation the optimal action for the team in possession, the blue team, should be to pass the ball all the way to the goal and hope that the small chance of another player from the same team controlling the ball pays off for the high reward you’d get from successfully controlling the ball at that location.

Don’t want to raise your hopes so specifying that what I’ll be proposing here doesn’t directly address this goalkeeper area problem but does help reduce the problem.

I use game 1 from Metrica Sports’ release available here - https://github.com/metrica-sports/sample-data/tree/master/data/Sample_Game_1. The findings WRT to the home and away team obviously don’t carry over to all games but the more general inferences probably do.

Let us look at the proportion of the pitch that offers a positive AttackEPVAdded_xy at each instant the team had possession of the ball. 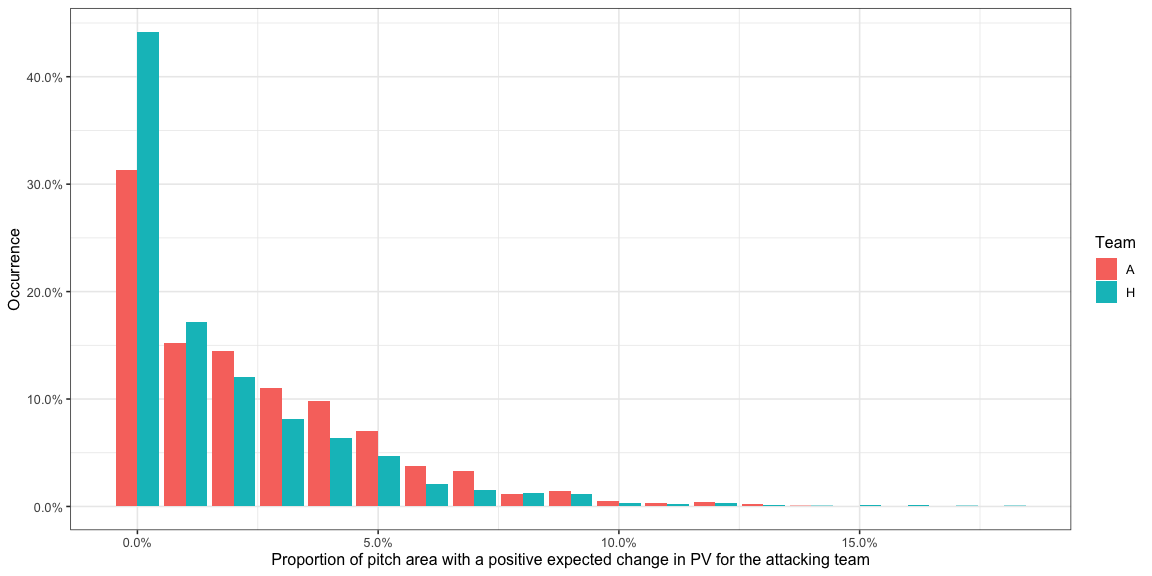 Let us look at the values of the AttackEPVAdded_xy itself.

If the team were to randomly pass to any point on the pitch, at each instant of the game, what AttackEPVAdded_xy could they expect? This would be the same as averaging the AttackEPVAdded_xy values over the entire pitch and would look like - 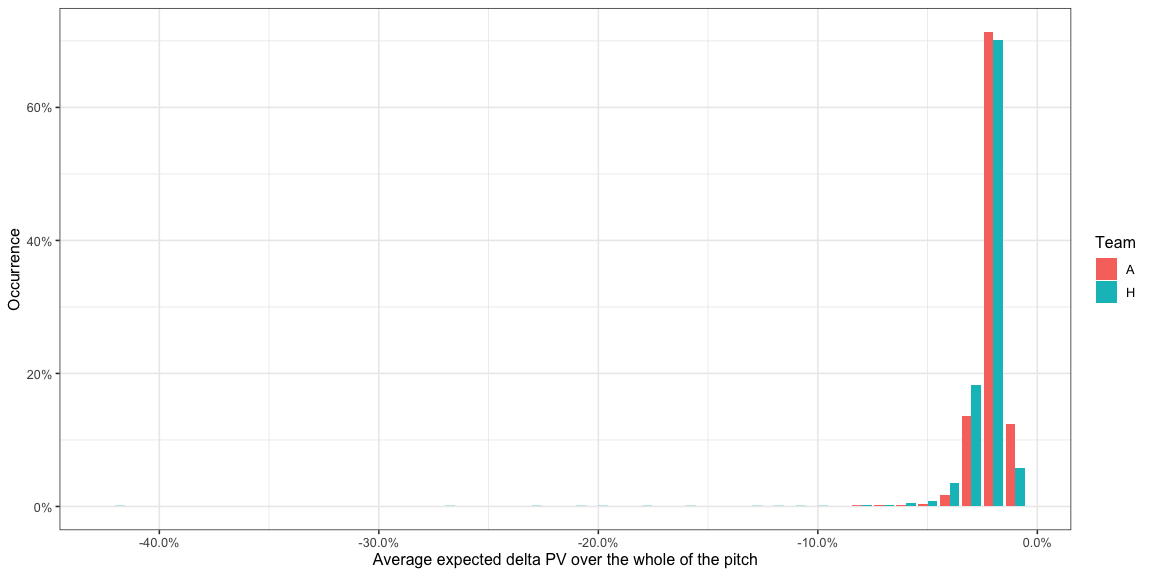 If we instead look at the best option the team has at any instant, AttackMaxEPVAdded - 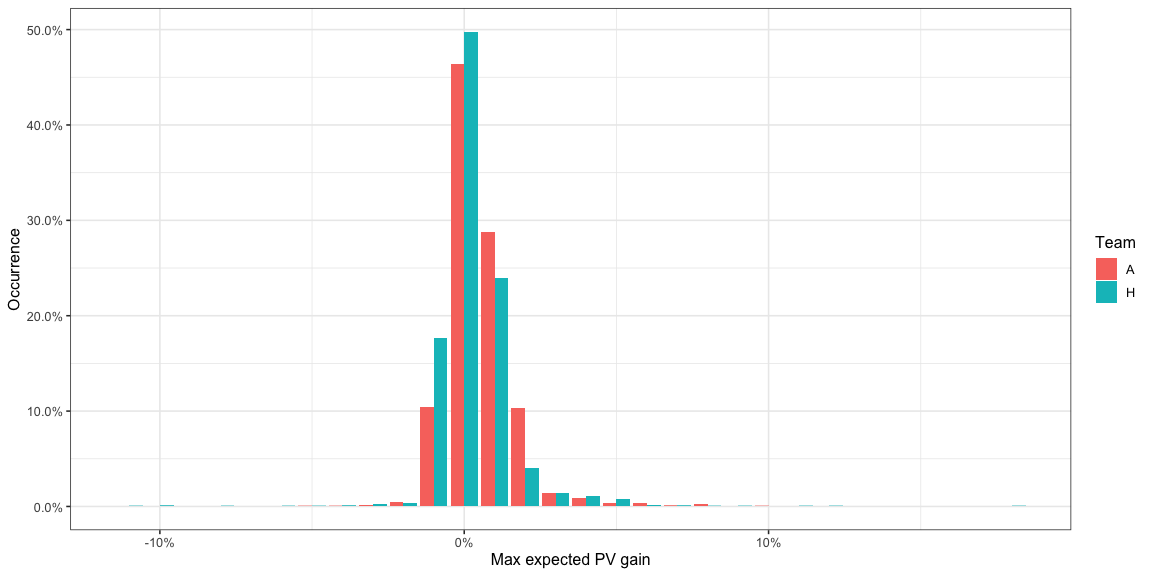 The proportion of time AttackMaxEPVAdded is above 2% -

How about where these options are available?

The location offering AttackMaxEPVAdded at each instant during the sample of frames looks like as below. Both teams have almost equal possession so don’t worry too much about normalising this chart. 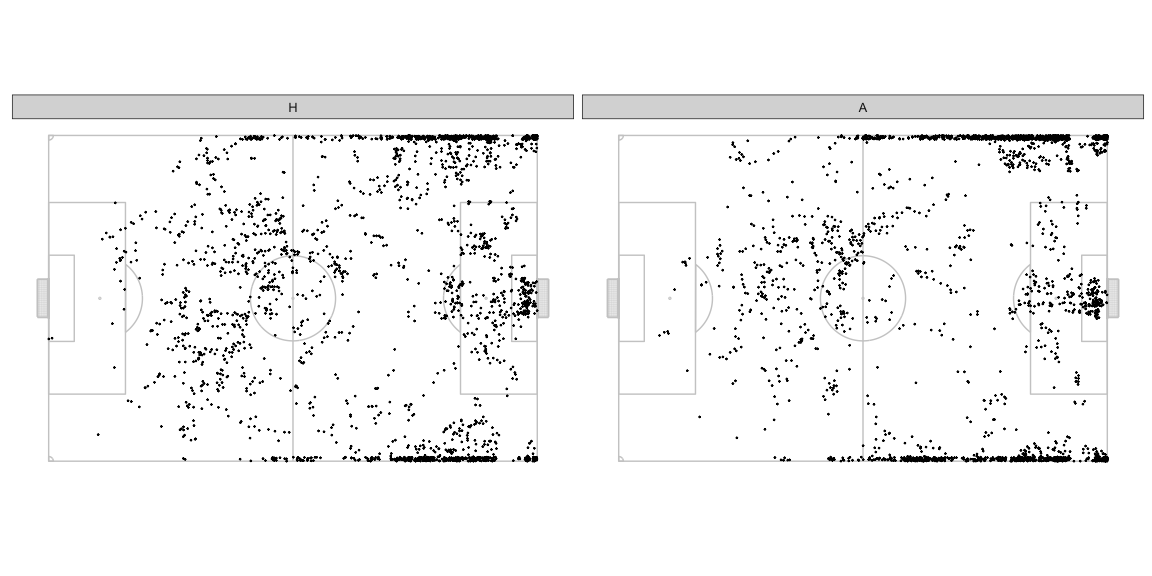 We haven’t looked at the distribution of the ball positions in these frames so we shouldn’t draw detailed conclusions from just these figures. That analysis is not necessary for the point of this post anyway so we’ll skip it. This is just warming you up to how we can look at things.

If we filter only the frames where AttackMaxEPVAdded > 0.02, these are the frames which had at least one pass which allowed the team to make substantial progress towards scoring. Note that these are potential passes that could have been played and not necessarily the actual pass that was played at the time. There may also have been more than one such pass at any frame but we will pick only the one with the AttackMaxEPVAdded value. It’s also likely that during the course of the play, a similar kind of pass continued to remain the optimal choice for consecutive frames in the sample and you would therefore see it multiple times. 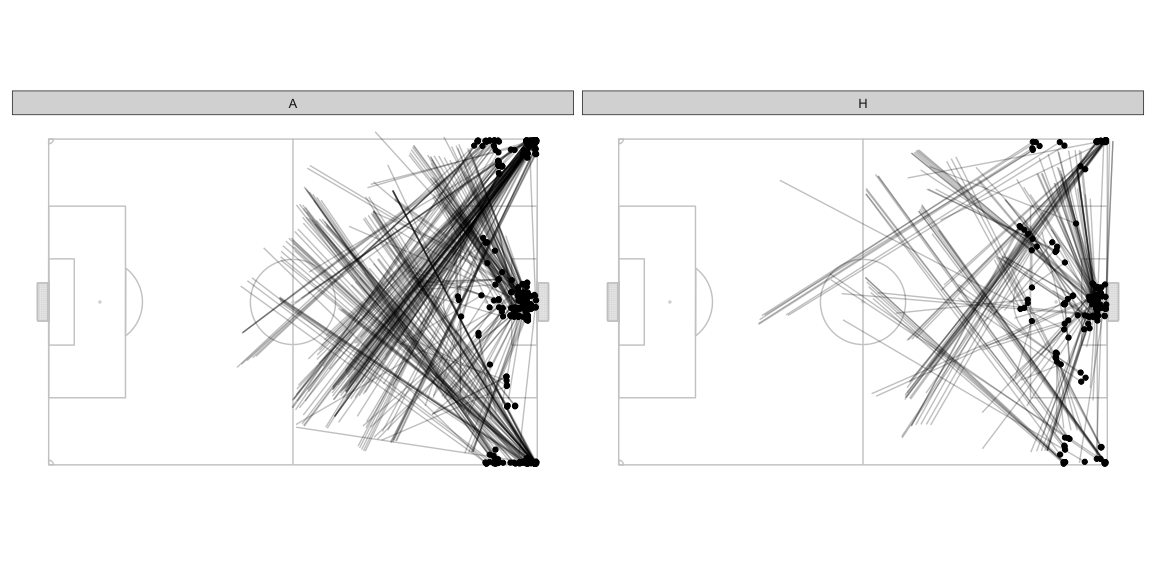 This is point of this post. Thanks for staying with me. All the stuff above was to get you comfortable with the setting which hopefully you are by now.

The reason I started writing is because while these are rewarding passes if they actually happen, it is also much harder to execute such passes. In the EPV paper, there is a pass probability component which is a logistic regression model but if it is like most other pass probability models then it is also modelling the probability of accurately passing to a particular point on the pitch and the training data is probably based on historic pass data which are again outcomes. I think there is room to improve this.

The risk of passing the ball out of bounds, or not being able to pass accurately to the point with the maximum EPV added is much higher for passes close to the sidelines, long passes, and so on compared to easier passes to someone in the middle of the pitch or to someone closer to the player in possession. Until now we were looking at an outcome based AttackMaxEPVAdded i.e. the EPV the team could expect to gain if the ball reached a particular (x.y) but if we switch to an intention based AttackEPVAdded_xy, i.e. the EPV the team could expect to gain if the ball was attempted to be passed to a particular (x.y) then we would need to incorporate the risks of inaccuracy in passing. There are other factors that could also cause inaccuracy such as pressure on the ball, the passer’s body orientation, etc. but for now we will keep it simple and consider only the length of the pass and the target location. Note that the term inaccuracy is typically used to describe whether a pass was successfully received by a teammate but in this post it is being used to describe whether a pass intended for a particular location actually reaches that location or goes somewhere else. 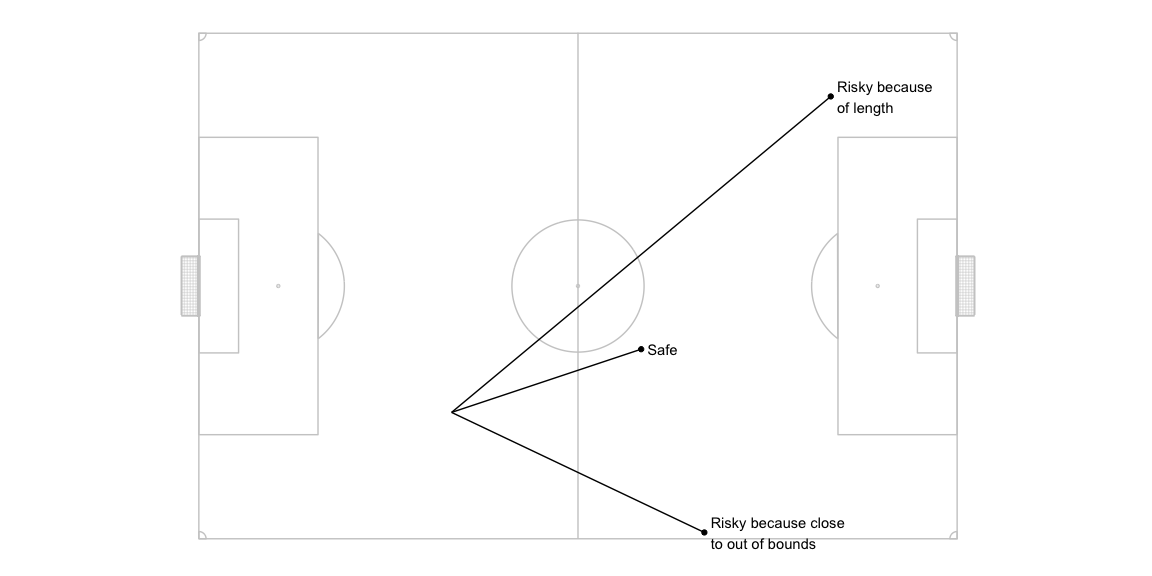 To model this inaccuracy - let us assume that a pass intended for a particular location x,y could actually go anywhere in the neighbourhood of x,y depending on how far x,y is from the pass origin location. To simulate this, I take the intended pass target location and calculate possible actual pass target location by adding some noise to the intended coordinates. For actual targets that go out of bounds the appropriate corner, goal kick, or throw in location is calculated and considered as the next event and the PV calculation is done accordingly. 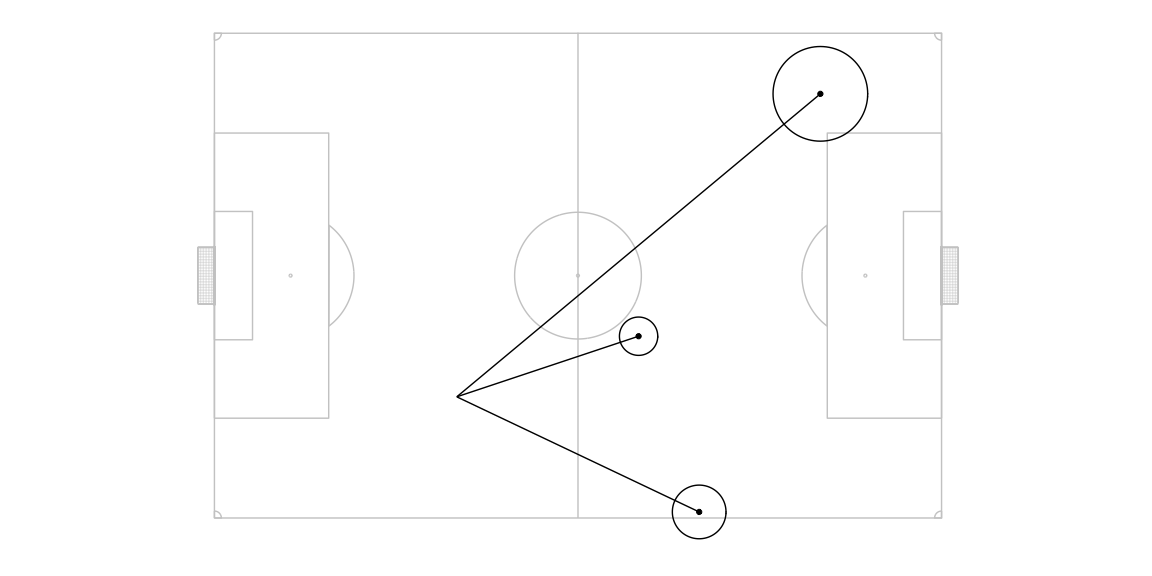 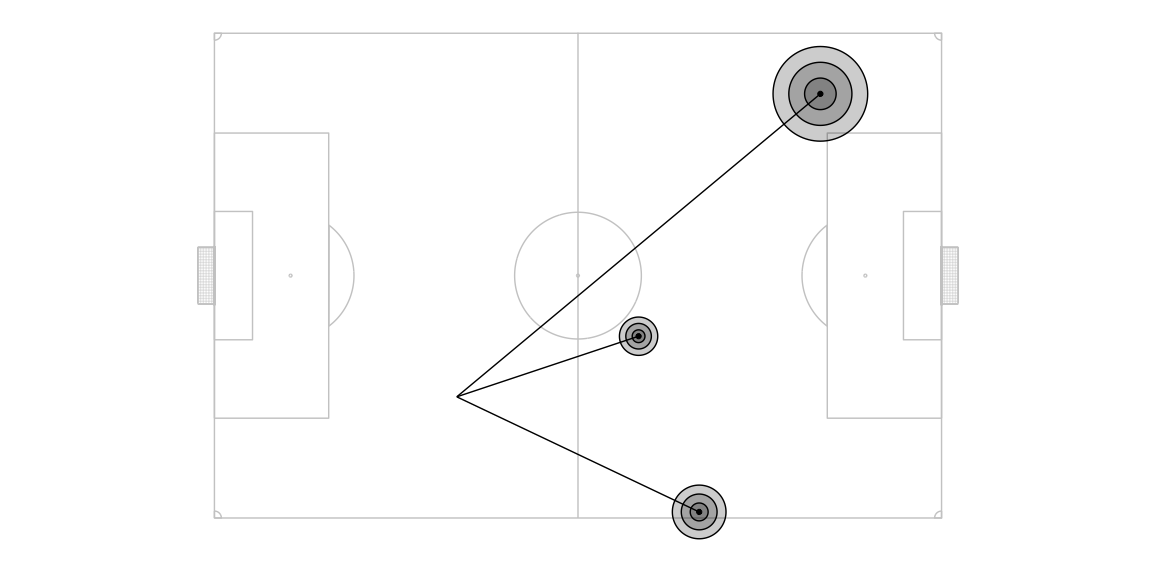 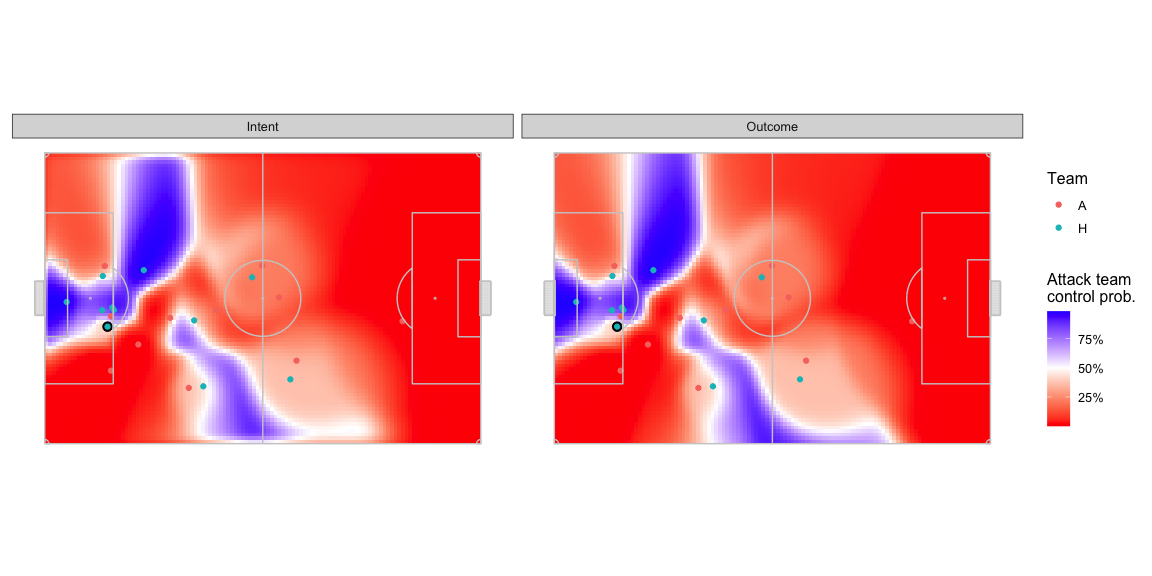 Here is what the delta in control probability between the two looks like. Note the change in the colour scale - 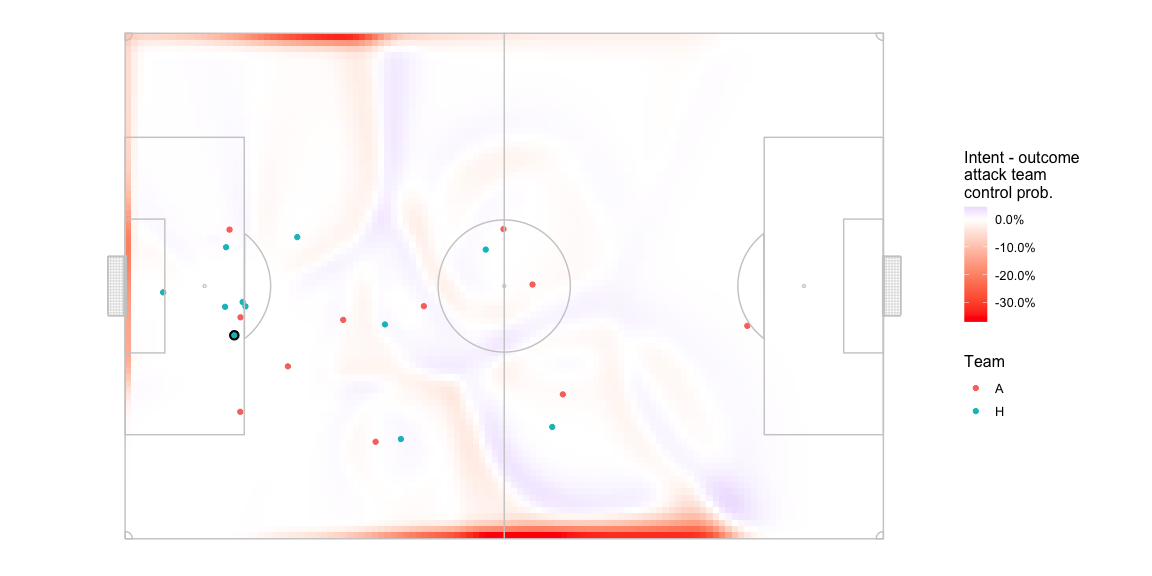 Let’s exclude the edges and see how much the central areas change by. Again note the change in the colour scale - 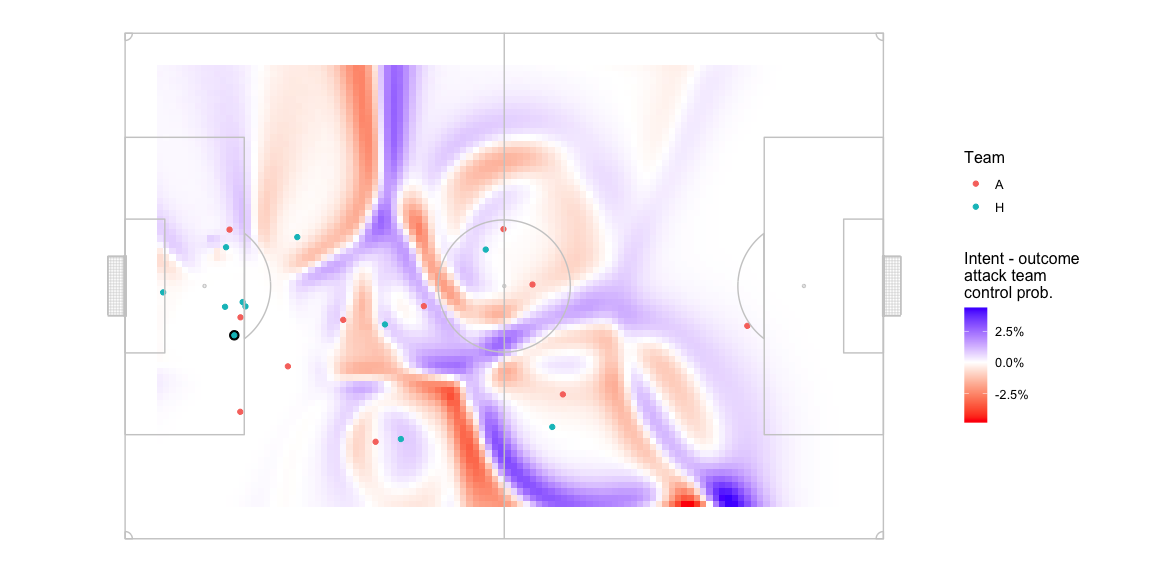 What difference does that translate to in terms of the AttackEPVAdded_xy 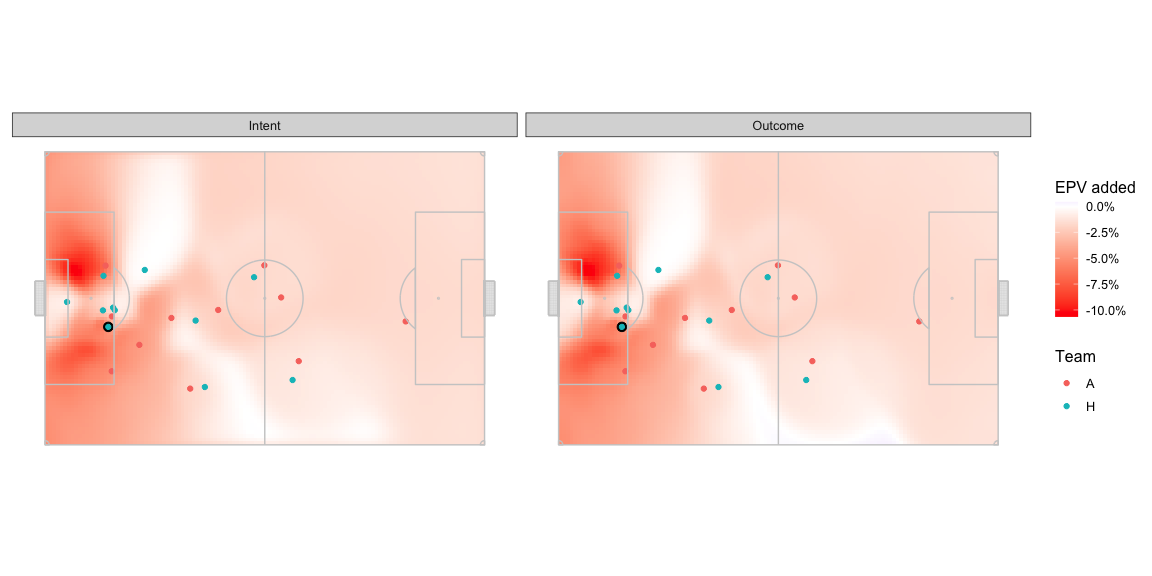 Okay not very easy to spot differences. The delta in the central area looks like - 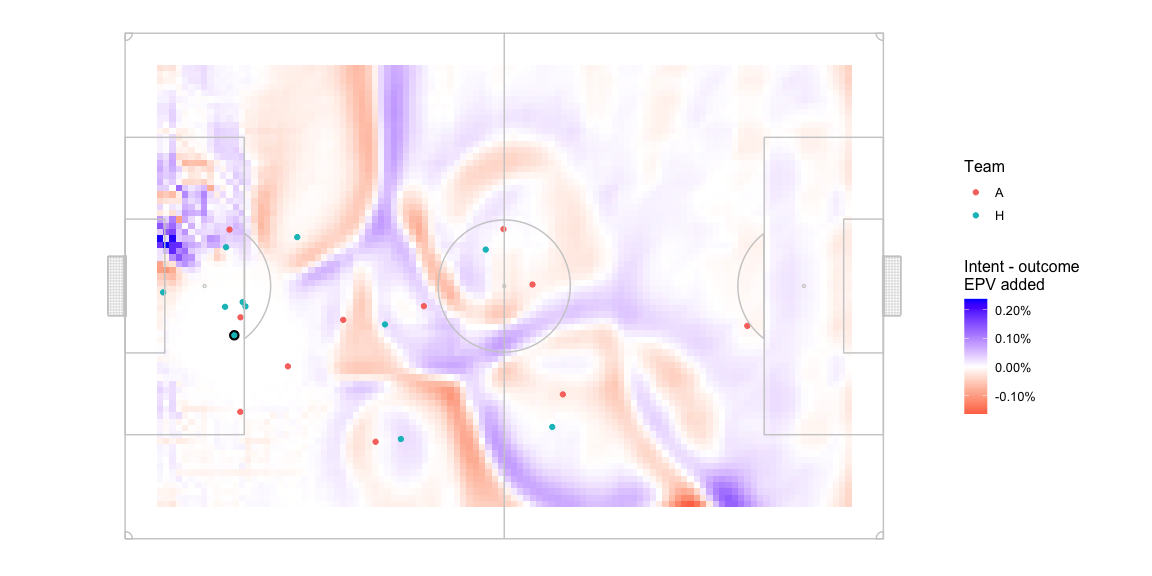 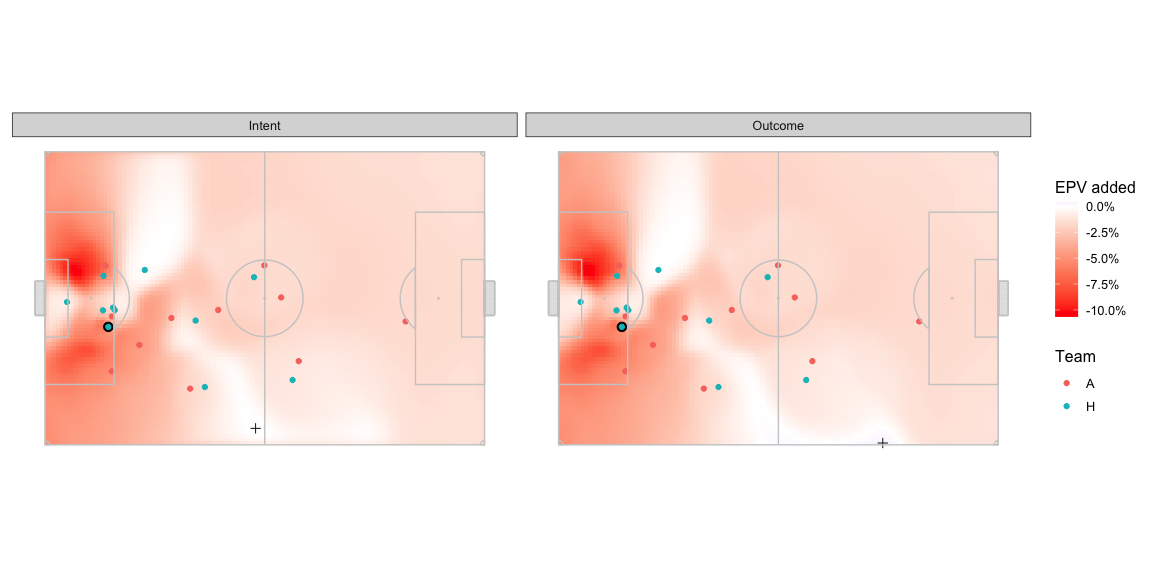 The target is still on the right wing, but near the centre line as per the intent model whereas the outcome based optimal location is around a quarter of the length of the pitch farther ahead and much closer to the edge of the pitch.

Before we look at the distributions from earlier again, here is a quick comparison of the change - 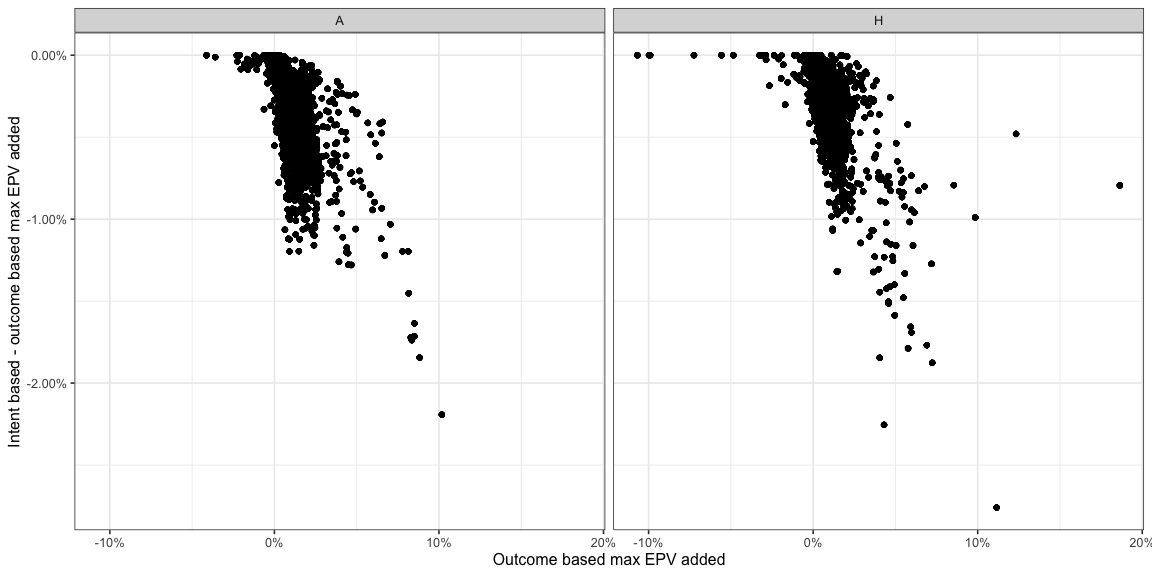 Here are the rest of the distributions with the comparisons. 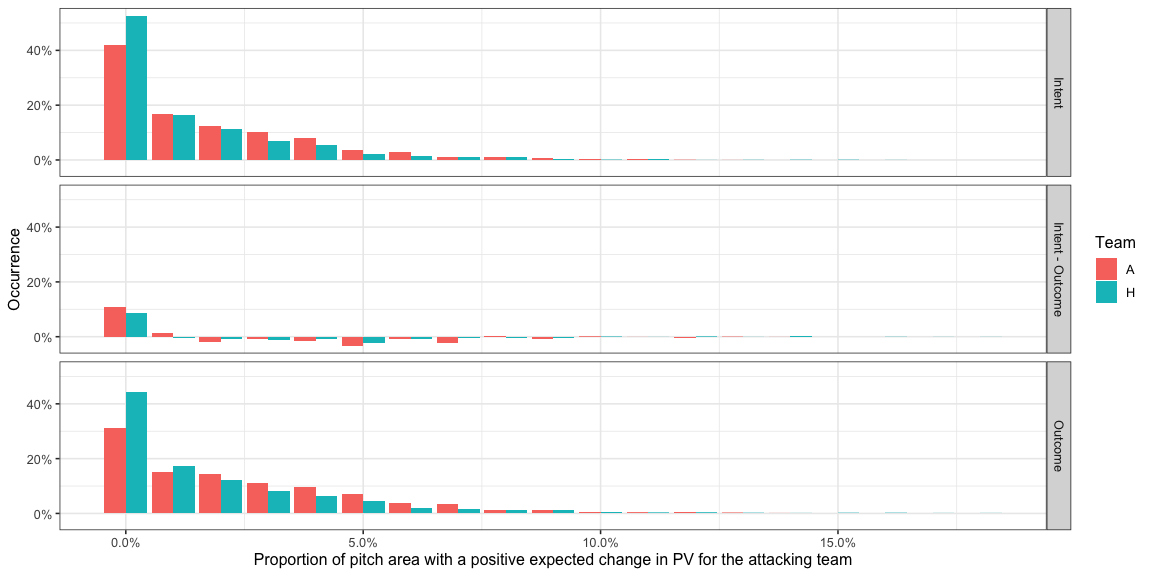 The other distributions also change in a similar manner - 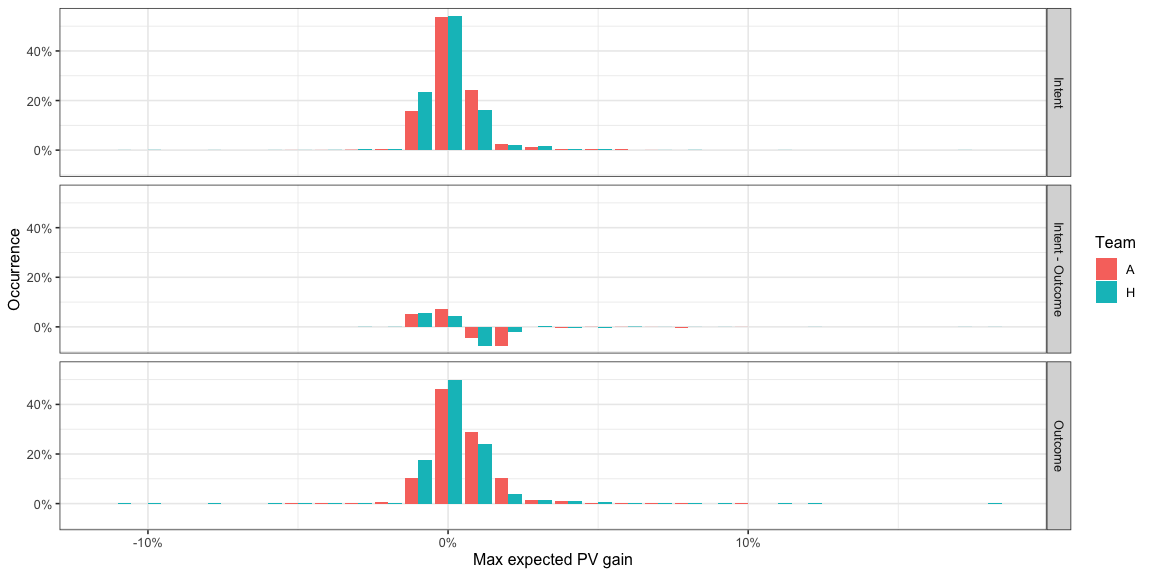 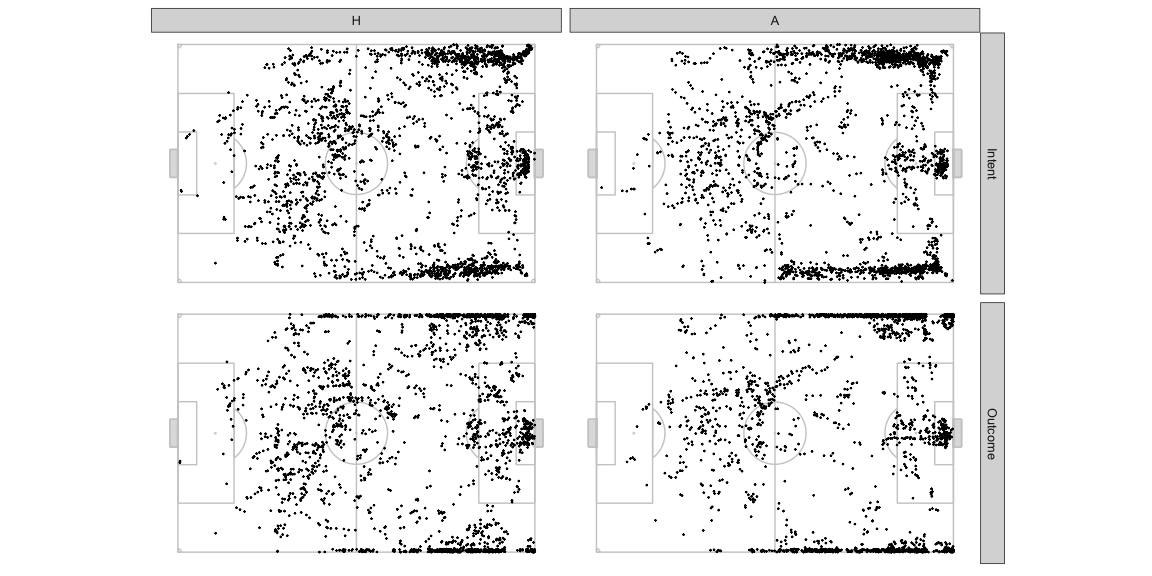 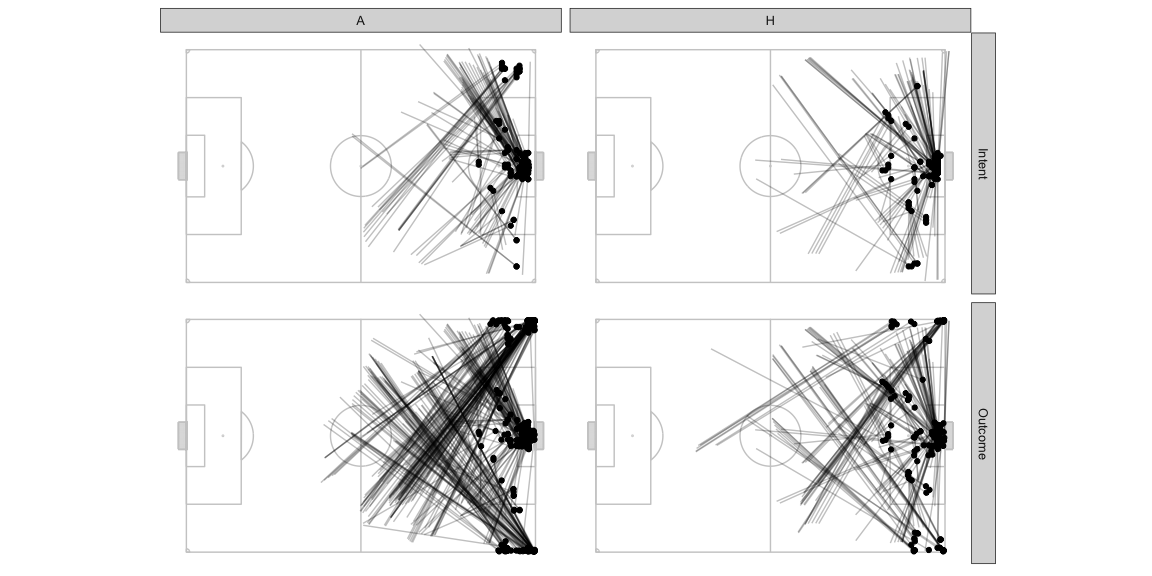 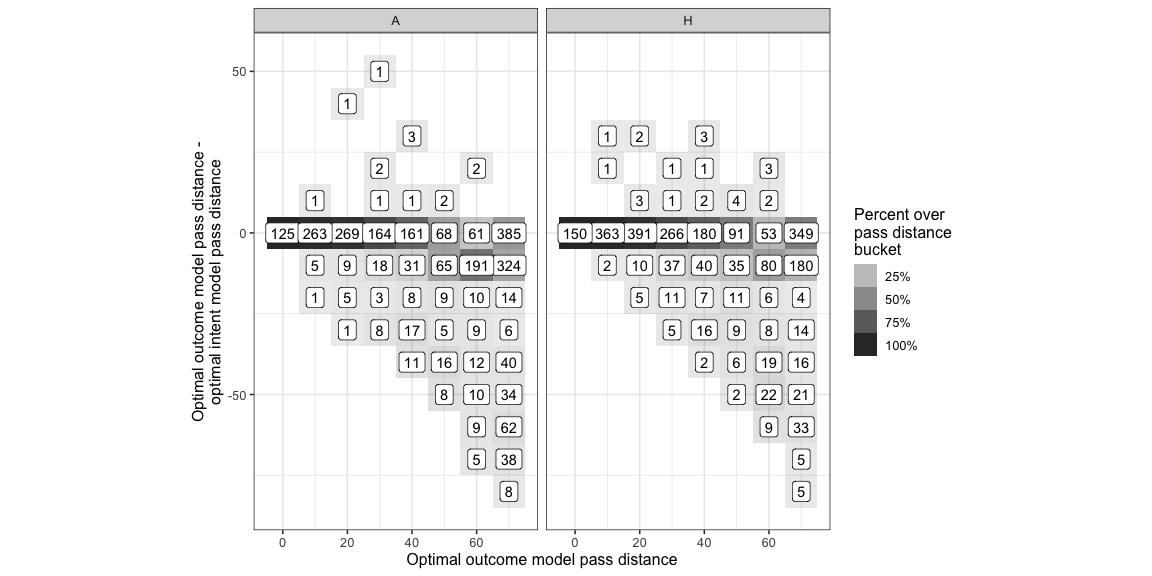 ( We use a distance based noise function because we expect longer passes to be harder to execute. The trend of longer passes seeing a more drastic change might be a self-fulfilling result as a consequence of our formulation of noise. Some day we’ll have a good passing inaccuracy model and then we’ll know. )

The distance between the two optimal locations - 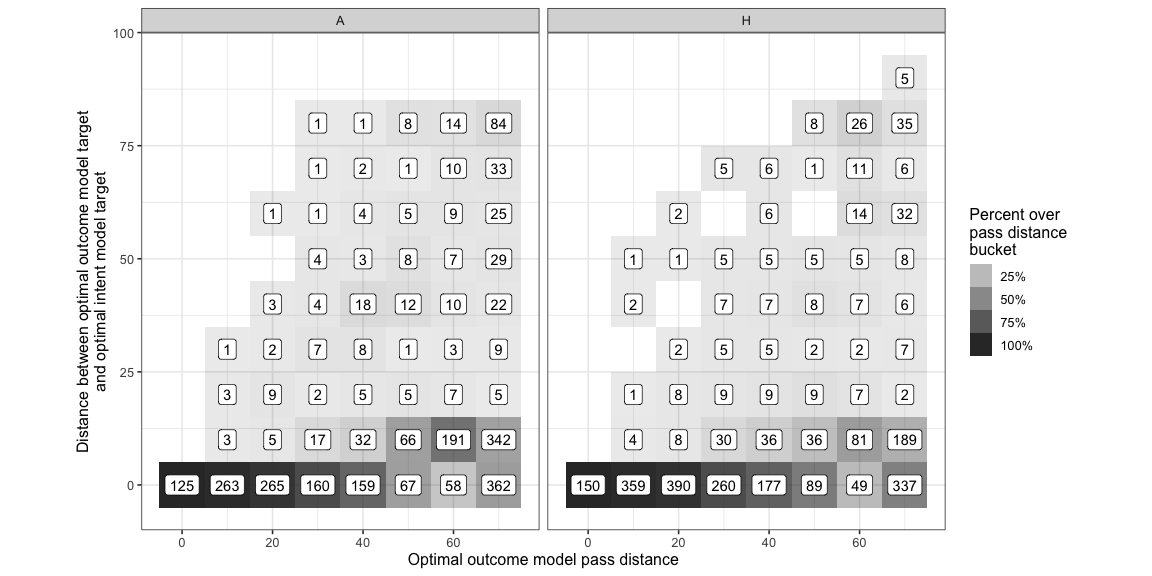 Most of the time is is within 10 units ( 1/12th the length of the pitch ) which means they are close enough to each that is probably doesn’t matter much. There are many cases though where this distance is quite large, i.e. cases the two locations are farther apart than 10 units. Those cases are where an intent based model is evaluating the situation and evaluating the options better than an outcome based model.

Extending this to other actions, eg. shots

If we look at shots as another example, there is a gap between xG and PSxG which is where an intent based model would fit in. xG captures all the possibilities in that situation and PSxG captures the final outcome from that situation but neither are a good measure of intent. To connect intent, wanting to shoot at a particular point on the goal, with a particular speed, with a particular trajectory etc. with outcome, the final shot properties, we could repeat a similar process as above highlighting what sort of errors can be expected in any of those properties of intent. For eg. choosing a very high speed shot probably causes higher noise in the target point on the goal and therefore the intent based PSxG should include other noisy trajectories which consider the possibility of a shot being in the neighbourhood of the final shot to evaluate how good a decision it was to pick that point.

The difference between the expected reward from an intention and an outcome is noteworthy.

There are a lot of simple assumptions built into this analysis. It would be useful to validate those assumptions from data, which I don’t think we can do from publicly available resources though.

On Twitter - @thecomeonman, or on mail - mail dot thecomeonman at gmail dot com